Last September Dropsolid sponsored and attended Drupal Europe. Compared to the Northern America’s conferences, getting Europeans to move to another location is challenging. Certainly when there are many conferences of such high quality that compete such as Drupalcamps, Drupal Dev Days, Frontend United, Drupalaton, Drupaljam, Drupal Business Days. I’m happy for the team they succeeded in making Drupal Europe profitable, this is a huge accomplishment and it also sends a strong signal to the market!

Knowing these tendencies, it was amazing to see that there is a huge market-fit for the conference that Drupal Europe filled in. Also a great sign for Drupal as a base technology and the growth of Drupal. Hence, for Dropsolid it was a must to attend, help and to sponsor such an event. Not only because it helps us getting the visibility in the developer community but also to connect with the latest technologies surrounding the Drupal ecosystem.

The shift to decoupled projects is a noticeable one for Dropsolid and even the Dropsolid platform is a Drupal decoupled project using Angular as our frontend. Next to that, we had a demo at our booth that showed a web VR environment in our Oculus Rift where cotent came from a Drupal 8 application. 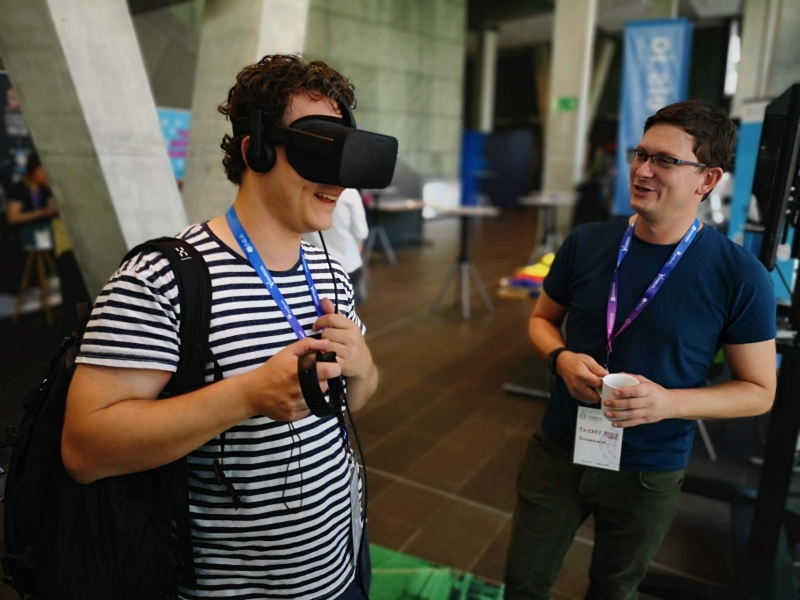 On top of that, Drupal Europe was so important to us that our CTO helped the content team by being a volunteer and selection the sessions that were related to Devops & Infrastructure. Nick has been closely involved in this area and we’re glad to donate his time to help curate and select qualitative sessions for Drupal Europe.

None of this would have been possible without the support of our own Government who supports companies like Dropsolid to be present at these international conferences. Even though Drupal Europe is a new concept, it was seen and accepted as a niche conference that allows companies like Dropsolid to get brand awareness and knowledge outside of Belgium. We thank them for this support!

From Nick: “One of the most interesting sessions for me was the keynote about the “Future of the open web and open source”. The panel included, next to Dries, Barb Palser from Google, DB Hurley from Mautic and Heather Burns. From what we gathered Matt Mullenberg was also supposed to be there but he wasn’t present. Too bad, as I was hoping to see such a collaboration and discussion. The discussion that got me the most is the “creepifying” of our personal data and how this could be reversed. How can one gain control the access of your own data and how can one revoke such an access. Just imagine, how many companies have your personal name and email and how could technology disrupt such a world where an individual controls what is theirs. I recommend watching the keynote in any case!”

We’ve also seen how Drupal.org could look like with the announced integration with Gitlab. I can’t recall myself being more excited when it comes to personal maintenance pain. In-line editing of code being one of the most amazing ones. More explanation can be found at https://dri.es/state-of-drupal-presentation-september-2018.

From Nick:
“Another session that really caught our eye and is worthy of a completely separate blogpost is the session of Markus Kalkbrenner about Advanced Solr. Perhaps to give you some context, I’ve been working with Solr for more than 9 years. I can prove it with a commit even!  https://cgit.drupalcode.org/apachesolr_ubercart/commit/?id=b950e78. This session was mind blowing. Markus used very advanced concepts from which I hardly knew the existence of, let alone found an application for it.

One of the use cases is a per-user sort based on the favorites of a user. The example Markus used was a recipe site where you can rate recipes. Obviously you could sort on the average rating but what if you want to sort the recipe’s by “your” rating. This might seem trivial but is a very hard problem to solve as you have to normalize a dataset in Solr which is by default a denormalized dataset.

Now, what if you want to use this data to get personalized recommendations. This means we have to learn about the user and use this data on the fly to get these recommendations based on the votes the user applied to recipes. Watch how this work in the recording of Markus and be prepared to have your mind blown.”

There were a lot of other interesting sessions and most of them had recordings and their details can be found and viewed at https://www.drupaleurope.org/program/schedule. If you are interested in the future of the web and how Drupal plays an important role in this we suggest you take a look. If you are more into meeting people in real-time and being an active listener there is Drupalcamp Ghent at the 23rd and the 24th of November. Dropsolid is also a proud sponsor of this event.

And an additional tip: Markus’s session will also be presented there ;-)