A new year also means some new predictions. When it comes to innovation in the web technology industry, innovation is, as always, moving faster than expected.

In this blog I will share a couple of items that we should keep an eye out for in the next 12 months within the web development world. As with any prediction, I can’t see in the future - so judge for yourself. :-)

One of the first major innovations that I see happening in 2021 is the adoption of Cloud IDE’s. Cloud what? In short, a development environment that doesn’t need anything on your local computer to make changes to a specific project.

For someone that is just starting out, this is a very daunting task, and most often requires help from senior profiles to get you started. Translate this to classroom tasks and you can see why more often than not, this kind of complexity is not taught. It would take more time to set it up on the variety of laptops around then the actual teaching. I’ve seen this firsthand myself, when I did some guest lectures.

Luckily there are solutions out there that try to make local development easy, such as Dropsolid Launchpad, DDEV or LANDO but all of them still require certain knowledge and at the very least a powerful computer that can run Docker.

Disruption wouldn’t be called disruption if this model could see itself being threatened. Cloud IDE’s are this disruption. Imagine logging in to your development platform and be able to click edit on the respective environment you would want to work upon. This button opens up a window with an IDE, tuned to your preferences and with all the extensions you need, and with all the connections already setup. You are able to make a change, enable debugging and go through the issue step by step, make a change, commit it and deploy. All within the browser and with the compute power greater than any consumer laptop.

Some might say this will never take off - but then again, people said the same of video game streaming services like Stadia. Stadia is outperforming many local gaming rigs today at a performance level that has never been seen. If this works for games, I’m certain it works for development environments as well.

Only time will tell.

The majority of the web today is powered by monolithic applications such as Adobe Experience Manager, Sitecore but I also count Wordpress & Drupal to be in that category. This isn’t really a problem but there is a trend that should worry some of these systems.

JAMStack stands for Javascript, API’s & Markup. It’s a weird acronym but basically it tries to push for the same level of separation as MVC (Model View Controller) paradigm but this time for the ever increasing complexity of the frontend stack.

I believe there is a great opportunity for CMS’s that are able to semi-decouple. Either they generate the content and they allow it to be styled or they allow components to be loaded in, and make use of the API endpoints. This flexibility is key, as you still want to allow content editors to make amazing landing pages in a WYSIWYG fashion, while also enabling great digital experiences using JAMstack components where it makes sense.

Drupal is very strong in allowing any form of consumption of its content and is in the sweet spot of today's innovation. It allows itself to be used as the A in Jamstack, as it can be a pure API. But at the same time it allows for rapid prototyping and rapid site building using the known and tried methodologies. Over time I do think API’s and the tooling around for CMS’s will become more standard and perhaps follow a crossing path between GraphQL & Schema.org, so that also tools leveraging these API’s don’t have to be reinvented from scratch.

For a long time, nobody cared about adding more SAAS services to a website. Services like Google Analytics, Hotjar, Intercom, etc… were added without even thinking about the concept of personal data. With the GDPR guidelines, but also the other privacy regulations all around the world, choosing such services comes with additional responsibilities but also liabilities for your brand and company. Not only that, but we have seen a major amount of data breaches all around the world from SAAS service providers. Sometimes this data is shared with 3rd party vendors in order to allow advertisements but also to combine data and form user profiles across multiple clients. The so-called “third party cookie”

This third party cookie is now seeing its demise. And it should have been abolished a long time ago. Adopting a service should not bring your users in danger, and certainly not without them knowing it. Today, Safari, Brave, Firefox all block third party cookies already. Google Chrome will stop doing so in 2022. I hope they reconsider that date, as it’s time to go to a more open and private web as soon as possible. Digital Marketers will still be able to personalize their sites, make use of advertisements but you will no longer put your customer at risk by sharing their data to a third party where you no longer have control over that data. Next to that, services that can guarantee that the captured data is owned by the brand will have additional benefits. And services that allow portability of these systems will win the Gold Medal. And more often than not, this innovation is led by open source systems such as Matamo or Apache Unomi.

The ultimate goal, but I suspect this is not for 2021, is that the customer has full control over his or her own personal data at any given time. Tim Berners-Lee (the godfather of the world wide web) is creating technologies like Solid to enable this shift.

With that in mind, 2021 will be a great year for services that can deliver on the promise of first party data while still enabling the Digital Marketeer all the tools necessary for optimizing the digital experience.

One thing won’t change in 2021 and that is the high bar customers have set for online brands. They will still expect a flawless journey throughout your online assets, and rightfully so. So you better get familiar with rapid delivery (Cloud IDE’s & Dropsolid Platform), great User Experience (Jamstack & Drupal) and a personalized experience with your online brand (Dropsolid Personalization). Curious how Dropsolid can get you ready for 2021? We’re here to help.

Talk to us about your next steps

Dries Buytaert, founder of Drupal, is already quite excited about these insights. 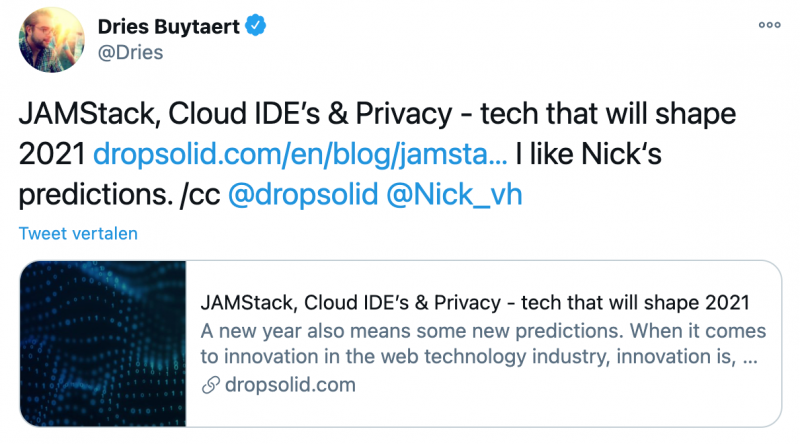 Technology trends in your inbox?