Amsterdam was our first time as a Diamond Sponsor at DrupalCon. Instead of the usual sort of giveaways, we wanted to make a more positive and direct impact. So we offered an exchange to attract visitors to our booth: Take our survey, tell us about the challenges in your daily jobs, and we’ll sponsor a contributor to focus on Drupal core improvements.

We’re donating 37 hours of Drupal core contribution time, thanks to everyone who stopped by, learned about the Dropsolid Platform and shared insights about their work.

We learned a lot from you, gaining deeper insights into some of the daily challenges web development teams face, some of the hidden costs involved, and what’s eating into developer’s motivation and time.

Who took part in the survey?

In this survey, we wanted to hear from developers who work with Drupal every day, web development team managers, and end-users who attended DrupalCon. Our sample of 6.5% of attendees showed a balanced split between people working in agencies and other organizations.

In the past, DrupalCon Europe has been a primarily developer-focused event. In our sample, we had about twice the number of developers responding than managers and leaders.

Teams are building lots of sites

One of our areas of interest is (of course) finding the right fit for our product and service. First issue: the kind of power we offer to generate new sites quickly and reliably on the fly wouldn’t be that interesting to you if you’re only deploying or managing one or two sites a year. We wanted to find out just how many sites teams are producing and maintaining. And wow! Teams out there are building lots of projects, way more than we expected.

We asked managers about the numbers of projects their teams build and deploy over a year. 58% of respondents reported their teams produce more than one website per month.

As expected, agencies are producing more sites than other companies. In agencies, 50% of managers surveyed report building 21-50 sites per year. Whereas, in other types of companies, 50% report producing ten or fewer sites per year.

We asked a similar question to developers, but we wanted to focus on the number of projects each developer works on personally per year. We know that efficient onboarding, context switching, and spinning up consistent sites for local development are all common challenges.

Considering the time it takes to initiate new projects, onboard team members, and get up to a productive speed, that poses a challenge. That’s a big part of why we built the Dropsolid Platform to work with any install profile and with any hosting infrastructure. Standardized tools like deployment tooling and workflow automation makes it easier to transition to new projects.

What’s taking up your time?

One of our concerns is reducing wasted effort and freeing up developer time. That’s why we asked developers to think of a day where things just don’t seem to be working right. What types of tasks seem to take an unreasonable amount of time? 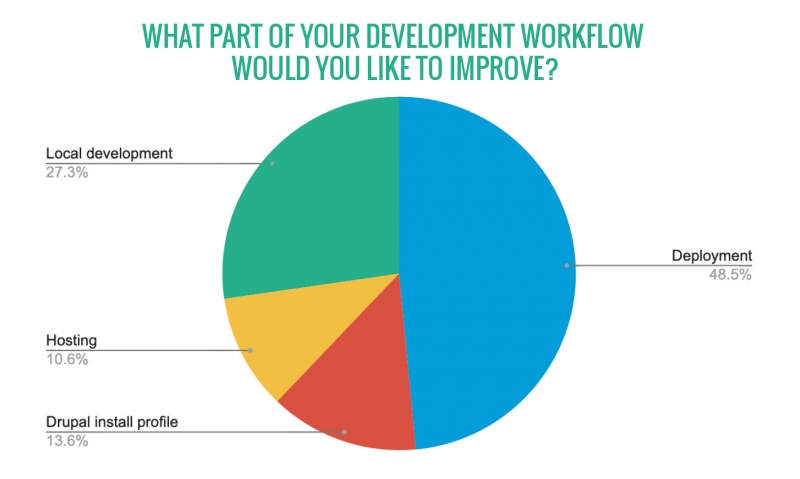 Also, even if 13% mentioned the setup of new environments as time consuming when you consider the sheer volume of sites teams are producing (more than 12 a year!) this must be having a big effect on productivity for those teams. 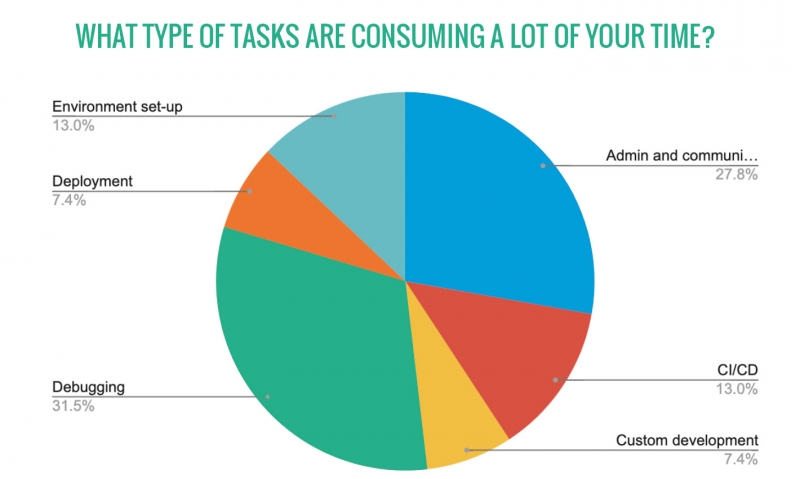 For us, this confirms the importance of looking at the entire workflow that goes into building digital experiences. From making it easier to estimate and plan projects, to making it easier to initiate, build, test, and deploy them, there seems to be room for improvement.

We’ve built our tools to make developers’ jobs easier. With so much time reported in debugging applications, it’s likely the lack of standardized tools for local development is causing some of these issues that you have to debug in the first place.

From the moment you initiate a project in Dropsolid Platform, from Dropsolid Rocketship, or your own install profile - to each time you deploy your improvements, we’re dedicated to creating a smooth experience for creative work so you don’t have to spend huge chunks of time on frustrating tasks.

Our tools also reduce the work they need to put into supporting others. For example, when we improve the user experience for content editors in our projects, they don’t need to rely on (“bother”) developers to get their work done. All of this lost time is rolled into the daily grind, so that you might not notice it eating away at your productivity, focus, and motivation. We can help you find it.